Looking for updates on projects happening in or around Bayside? You have come to the right place! Below you will find information regarding various projects in our community.

WisDOT has maintained and rehabilitated the ramps, bridges, pavements and other structures on I-43 for 50 years. The North-South Freeway has exceeded its design life and it is no longer economical to maintain.

This project includes the expansion of I-43 from four to six lanes, the reconstruction of five existing interchanges along the corridor, ​a new interchange at Highland Road, and the replacement of the Union Pacific railroad bridge over I-43 in Glendale. The project also includes the expansion of a section of Port Washington Road in Glendale from two lanes to four lanes. During construction, the project will work to keep two lanes open in each direction - similar to existing conditions.

This project is being completed by the Wisconsin Department of Transportation. Visit their website for any updates or questions.

The Milwaukee Metropolitan Sewage District will soon begin the reconstruction of sanitary sewer infrastructure on Brown Deer Road between Regent Road and the Union Pacific railroad.   Below is a tentative timeline and impacts for the project. The project is expected to begin on January 16, 2023.

Traffic to Bayside Garden Center will be available throughout construction.  With any construction, the stages are fluid as construction progresses and subject to weather.

This project is being completed by Milwaukee Metropolitan Sewerage District. Visit their website for any updates or questions.

Visu-Sewer will be cleaning and televising the sewer mains beginning August 29. The lining installation is anticipated to begin the week of September 12.  There are approximately 10,000 feet of main line and approximately 60 manholes.

Residents will begin to see blue Visu-Sewer trucks around the Village. Remember to keep toilet lids down during this process. 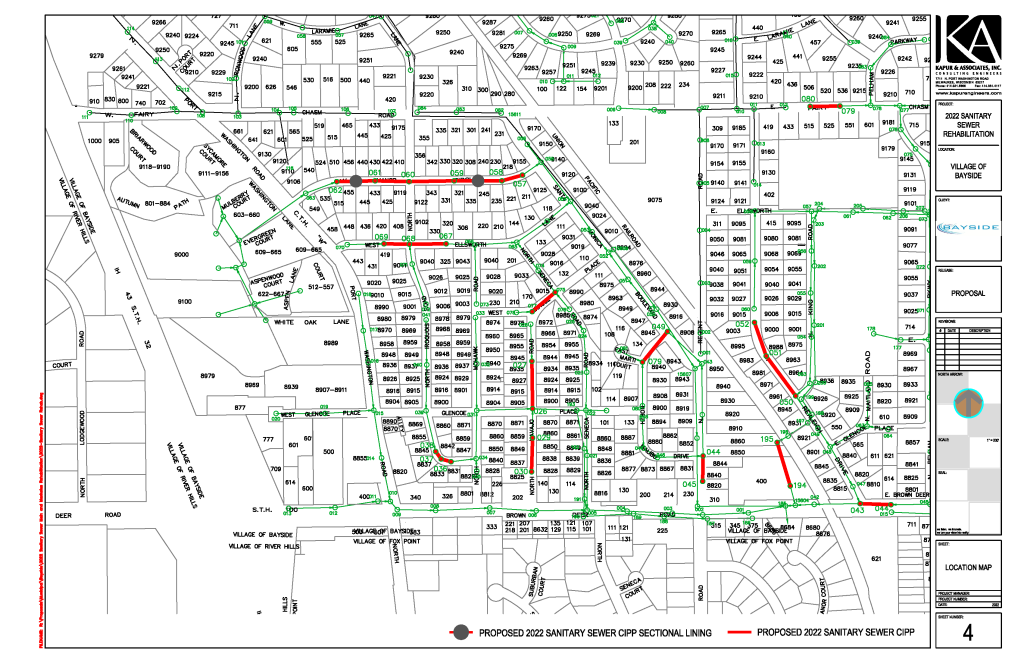 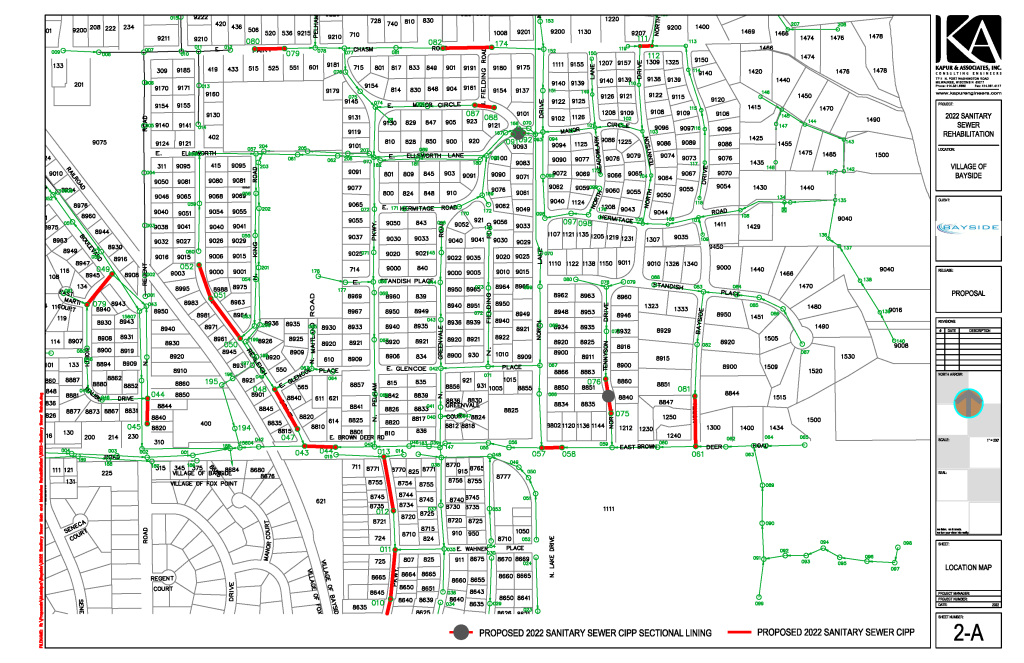 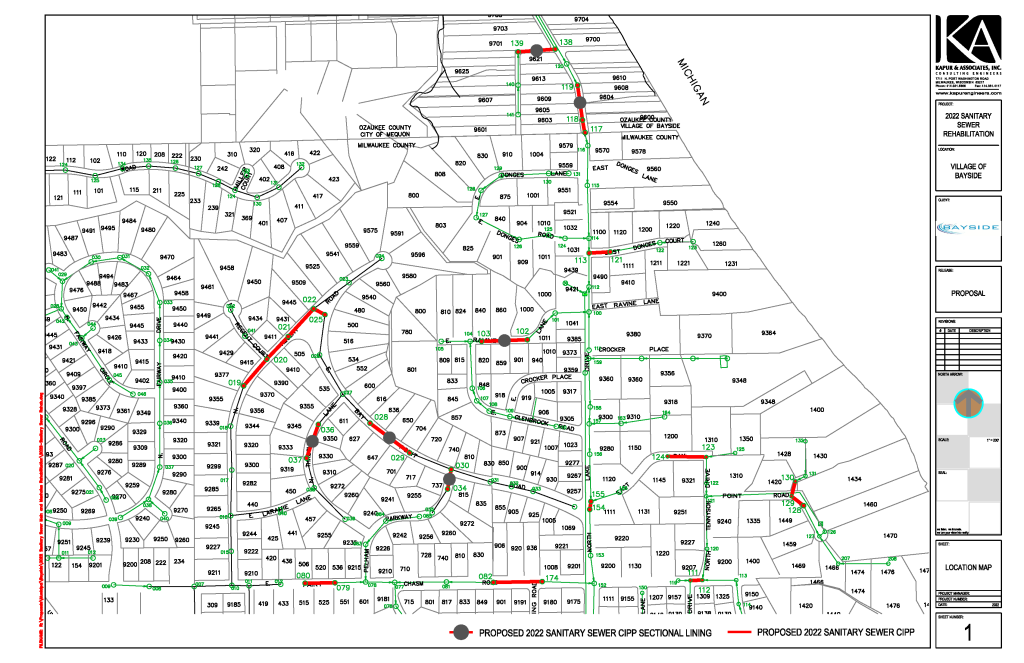 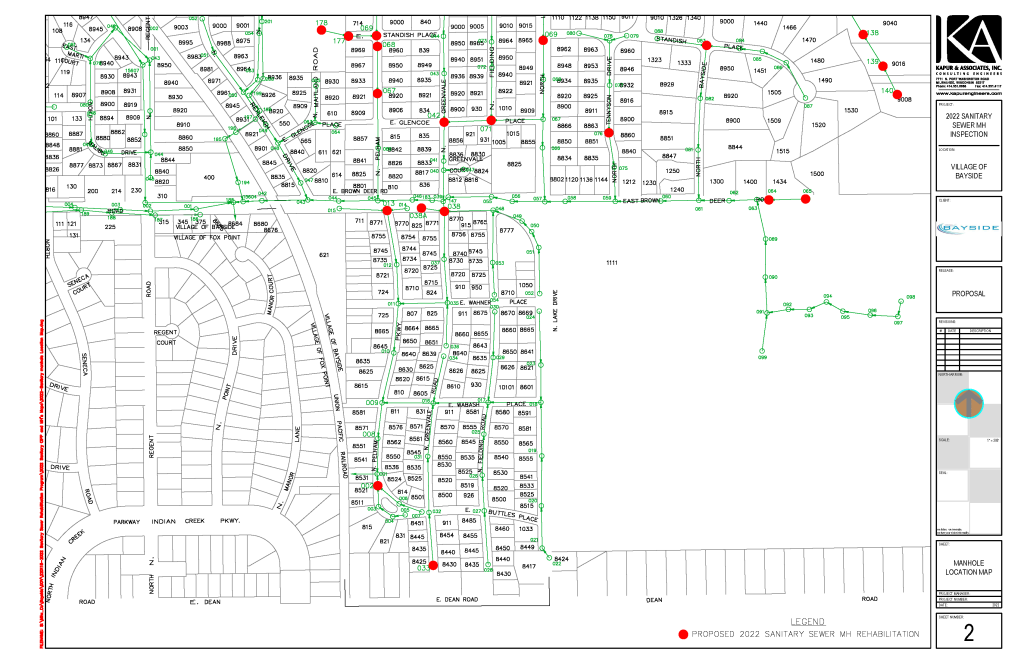 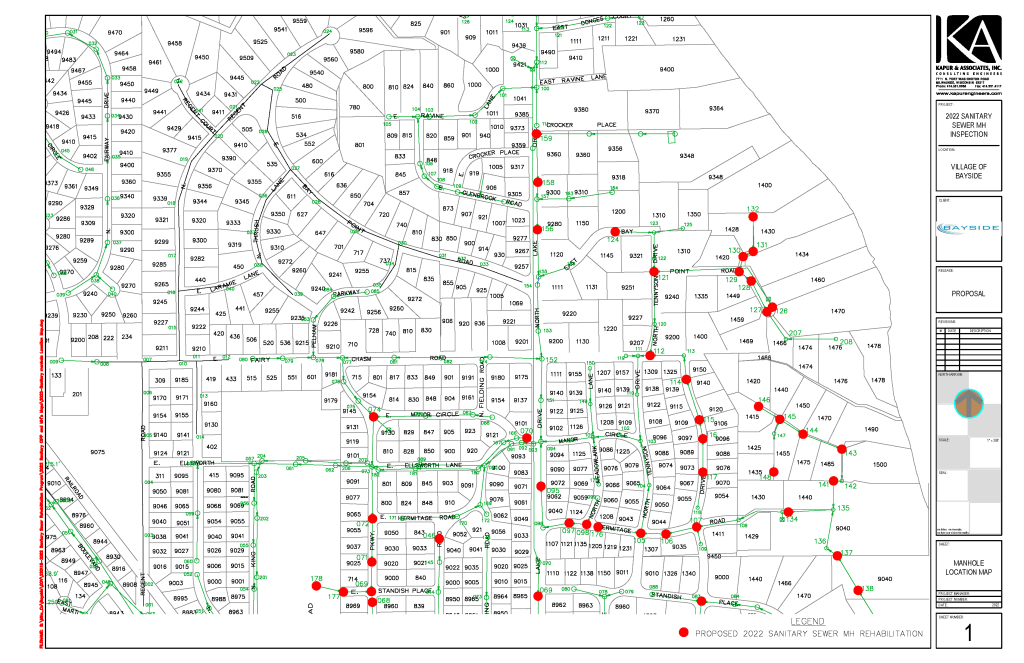 Building on previously installed Green Infrastructure Improvements, the Tennyson Drive Stormwater Management Infrastructure Project seeks to addresses localized flooding during significant storm events and allow stormwater from the drainage basin to collect and direct runoff to the ravine located near Standish Place, southeast of the Tennyson Drive area of concern that currently experiences flooding. The project is near completion. The project will be completed with Spring restoration of disturbed areas. 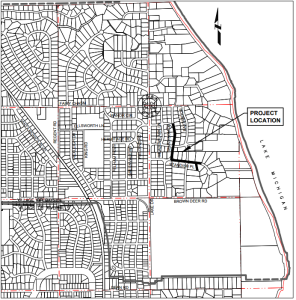 To assist with managing large storm events, the East Bayside Sanitary Sewer Relief System project evaluates and seek to develop additional sanitary sewer capacity for the area bounded by East Bay Point Road to the north, North Bayside Drive to the east, East Hermitage Road to the south, and North Lake Drive to the west.  The project consists of developing a new sanitary sewer relief system, which will extend and connect to another sanitary sewer relief to the intersection of Lake Drive and Manor.  Engineering plans and specifications for the project is currently being developed.

Similar to the East Bayside Sanitary Sewer Relief System project, the Village Engineer is preparing a work plan to identify sewer capacity and develop engineered solutions to enhance sanitary sewer capacity in the 8-block area bounded by Brown Deer Road, Krause Place, Iroquois Road, and Navajo Road.  The scope of work includes creating a computer model of the sewers in the area and develop recommendations for consideration.

The purpose of this project is to reduce the risk of flooding along Fish Creek in the Village of Bayside while protecting an environmentally sensitive stream corridor downstream. The scope of the project consists of conducting a preliminary engineering study of Fish Creek to mitigate for current and future anticipated flood risks associated with additional runoff expected from land use changes in the watershed.

The current effective Federal Emergency Management Agency (FEMA) floodplain for Fish Creek has not changed since these earlier studies and is only delineated in Milwaukee County within the Village of Bayside, which corresponds to the District’s jurisdiction.  No structures are within the effective FEMA floodplain. About a decade ago, the Southeastern Wisconsin Regional Planning Commission (SEWRPC) created new hydrologic and hydraulic models for Fish Creek that expanded the mapping upstream into Ozaukee County within the City of Mequon.  SEWRPC has not submitted the revised modeling and floodplain mapping to FEMA, because the Wisconsin Department of Transportation (WisDOT) requested that they delay until the Interstate 43 (I-43) widening project was completed and its improvements could be incorporated.

The updated SEWRPC modeling and floodplain mapping show eleven structures in the Village of Bayside are now at high risk of flooding. Preliminary SEWRPC modeling of proposed increases in watershed imperviousness shows greater flows and water surface elevations downstream, putting those eleven structures in Bayside at greater risk of flooding and potentially endangering other structures.  Fish Creek and its tributary are the District’s jurisdictional streams, and the District has a responsibility to explore flood mitigation options on these streams.

The Wisconsin Department of Natural Resources (WDNR) has designated the downstream portions of Fish Creek the Fairy Chasm State Natural Area.  Fish Creek flows through a 100-foot-deep chasm in this state-designated natural area owned by the Ozaukee Washington Land Trust.  Unique conditions have created a microclimate for species typically found further north.  Any proposed projects upstream shall protect this area against erosive streamflows.

The scope of the project generally consists of the following:

•             Reviewing the hydrologic and hydraulic modeling done by WisDOT and SEWRPC.  Fish Creek and its tributaries will be evaluated.

•             Analyzing alternatives for mitigating flooding within the Village of Bayside.

•             Recommending an alternative to reduce risk of flooding to structures in the Village of Bayside while protecting downstream reaches from erosion.

The Consultant’s evaluations and recommendations will be summarized in the Preliminary Engineering Design Report.

The Village has contracted Wallace Tree and Landscape, Inc. to remove an additional 108 trees within public right-of-way that have a yellow ribbon around them. Tree removal will been completed in the coming weeks. Stump grinding has begun and will be completed in the winter months.

The Milwaukee Metropolitan Sewerage District Private Property Infiltration and Inflow Reduction project is a pilot project to allow MMSD to rehabilitate the area near the Bay Point lift station. Funded through a grant, MMSD will engineer, project manage, and rehabilitate the private laterals through the MMSD PPII program allocation for the Village. This program will also assist with reducing flows contributing to the Bayside East Side Sanitary Sewer Relief as well. Letter have been mailed to impacted properties.